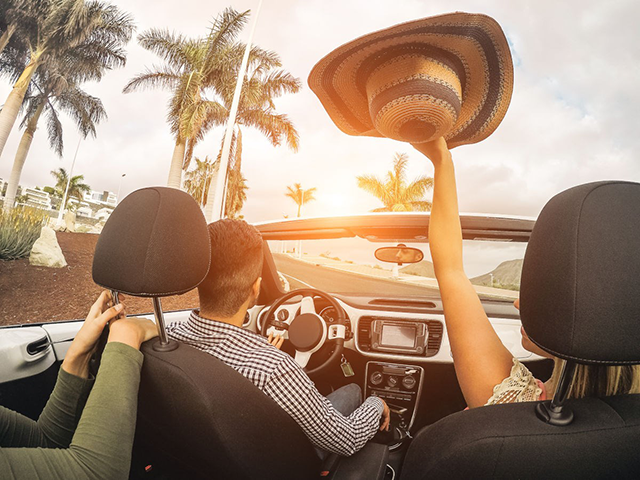 It’s easy to get around on foot or by bike on Marco Island. Public transportation isn’t bad either. However, having access to a rental car can certainly make life a little easier. While you’re here, you will likely want to visit Naples, Miromar Outlet Mall or maybe even Disney World. If you’re taking your group to Residents’ Beach or to dinner, you’ll want one.

If you aren’t planning on picking up a rental car at the airport, you can still get one locally. Plan your trip carefully and enjoy peace of mind on vacation.

When it comes to car rental in Marco Island, Hertz is probably the biggest (and it’s not that big). They have a location on 400 South Collier Blvd, right next to the Marriott Hotel. Also, there are multiple locations in Naples Florida, which is only 30 minutes from your Marco Island condo.

Enterprise is located on Marco Island in the same strip mall with Joey D’s. The exact location is 717 Bald Eagle Drive Unit 1c. They have pick-up service and they also do after-hours returns. We’ve rented cars here ourselves and have found it very convenient.

Avis does not have a location on Marco Island but has several nearby. Two are near Naples Municipal Airport, two are near Fort Myers, and one is in Cape Coral Florida. They have many other locations across Florida.

National and Alamo car rental is also good if you are flying into the Naples Municipal Airport (APF). You can have a car rental directly at the terminal.

Rates can fluctuate considerably in Florida depending on the season. In summer, expect rates as low as $30 per day. During the busy winter season, rates for a standard car jump to over $60/day.

Some of the best rates can be found on websites like Travelocity, and Expedia.

Chances are you are flying into Southwest Florida International Airport, the closest airport to Naples and Marco Island. Also known as the Fort Myers Airport, the facility is relatively small for an international airport, making renting a car and getting on the road to Marco Island fairly simple. In season, it’s a good idea to reserve one in advance. Inventory can get tight in the winter.

Getting to Marco Island from Southwest Florida International Airport (RSW) in Fort Myers couldn’t be simpler. Unlike driving from the Miami airport, signage is simple and direct between the airport and the interstate. The 47-mile drive to Marco will take you about 45-55 minutes.

If you rent a car from the terminal, go west to the Terminal Access Road. Use this road to reach the airport exit. Then go left to the Country Highway-885, then turn right to Country Highway-840. Merge onto I-75 leading to Naples. Use Exit 101 going to Marco Island via the Collier Boulevard. Go straight and you will be at the doorstep of your Marco Island vacation rental in no time. All the main streets are connected to this boulevard.

There is really no point in going to Marco Island through Miami unless you want to visit this exciting (but busy) city. The Miami International Airport (MIA) is 130 miles away from Marco. If you are driving at 60mph, you should reach the island in around two hours.

From the MIA you should take FL-836W to the US-41 that takes you to San Marco Road, which will take you to the east side of Marco Island.

Fort Lauderdale Airport is 116 miles away from Marco Island. The ride is nearly the same as from Miami, around two hours without traffic.

You need to take I-595W leading to I-75N, which will lead you to Collier Boulevard. This boulevard is connected to the southern part of Marco Island.

Remember to respect the law and enjoy your ride to Marco Island. Car rentals aren’t difficult to find, and the rides from any of the mentioned airports aren’t too long. See a few sights along the way. One word of caution: Marco Island has many pedestrians, cyclists and scooter riders. Be especially alert for these as you approach intersections and sidewalks.